The morning was cold and there weren’t many birds moving, but that didn’t stop the small, but hearty crew from walking around the 43 acre Pynchon’s Grist Mill Preserve today. All told we registered 65 species of vascular plants, 7 birds, 5 mammals, 5 tree lichen, and several insects. A good total for a cold day in the middle of winter. Other Bioblitz events are scheduled for May 23rd and July 18th to capture other species, like spring wildflowers and breeding birds, that use the land during warmer times of the year. More details about those events will be available closer to their dates.

Of course included in the plants are a whole host of invasive species – the kind we really don’t want on the property, and unfortunately several were more widely spread than expected. For instance, burning bush or winged euonymus has made its way up the hill sides, spread by birds and other animals enjoying the seeds. Invasive plant control will be an ongoing stewardship practice for the foreseeable future! 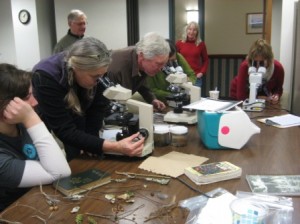 Back in December Shelby and several Clark University students visited Pynchon’s and took water samples. The goal being to document the many small phytoplankton, zooplankton and insect nymphs in Sucker Brook and the mill pond. Today we looked at the samples under microscopes after lunch in the West Brookfield Town Hall. Mostly we’ll need an expert to identify what was found, but we did see nymphs of dragonflies, mayflies and stoneflies. Finding those means that the water quality is good!