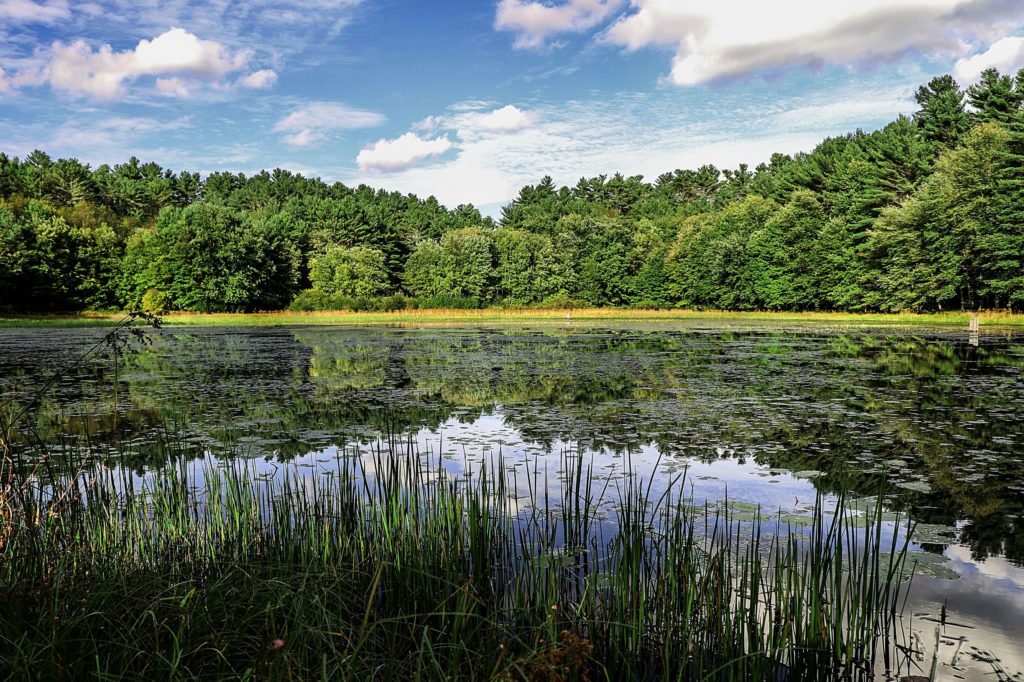 The East Quabbin Land Trust encourages visitors to all of its preserves. Please be respectful of the land and other visitors.  EQLT has several policies that guide use of the land, including a Dog Walking Policy,  Hunting and Fishing Policy and Recreational Trail Use Policy. We encourage you to go explore the Pynchon’s Grist Mill Preserve.

Pynchon’s Grist Mill Preserve is a 75-acre parcel located off Wickaboag Valley Road in West Brookfield.  The East Quabbin Land Trust purchased the property in 2013 and the Town of West Brookfield holds a conservation restriction on the land. Click here for the interpretive trail map.

The Pynchon Grist Mill site is part of the “Wickaboag Valley Historic District”.  Built in 1669, four years after the arrival of the first settlers, it was the first grist mill in the Quaboag Plantation.  Account books kept by John Pynchon at Springfield offer a precise record of the mill’s construction.  Before this mill and because of this isolated location, grain raised here had to be taken all the way to Springfield to be ground into flour or meal.

The Mill continued operation until both the settlement and the mill were destroyed in August 1675 during King Philip’s war.  A quote in “Quaboag Plantation alias Brookefield” by Dr. Louis E. Roy indicates “The remains of this millsite and the artifacts found there are probably the oldest relics in existence of Quaboag Plantation and of its most important mercantile structure.” At the sites dedication on November 1, 2014, Dr. Alison Vannah gave these remarks about the success of the start of Quaboag Plantation by men from Ipswich.

The most prominent natural feature of the Pynchon’s Grist Mill parcel is Sucker Brook, a major tributary to Lake Wickaboag.  Sucker Brook carries water from New Braintree, then flows into Mill Brook, Lake Wickaboag and ultimately the Quaboag River.  Just upstream is the Sucker Brook Flood Control Area owned by Mass. Department of Conservation and Recreation. The wetland complex associated with Sucker Brook is an important natural feature that mitigates flooding and provides critical wildlife habitat.  The pond was originally dammed for the grist mill and remains unnamed today.  Beavers maintain a dam at the former mill location.

The West Brookfield Conservation Commission holds a conservation restriction on the property allowing for public recreation, forest management and wildlife habitat improvements. Conservation of the land in 2013 was made possible through generous donations from individuals, the J. Irving & Jane L. England Charitable Trust and the Massachusetts Conservation Partnership grant program.