Wendemuth Meadow has been a joint conservation effort between the East Quabbin Land Trust and the Town of North Brookfield since the land first came on the market four years ago. After years of negotiations and strategizing about how to conserve the land, EQLT and the Town agreed that the land needed to be purchased from its former landowners and the Town would pursue a LAND grant to purchase a conservation restriction on the 30 acres of fields and wet meadow. Now we know that the Commonwealth has awarded the Town of North Broofield the grant that will cover 70% of the conservation restriction value!! Local fundraising efforts have already raised $15,000 towards the remainder of the cost. 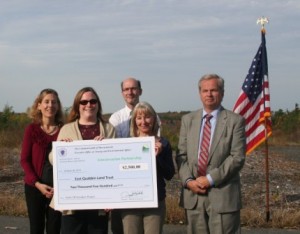